As the saying goes, fortune comes from risks. The Dragon's Treasure is Laplace M's daily gameplay mode. In this mode, players can form small teams of 3-5 people and head to the Dragon Island to steal Dragon Eggs. The Dragon Eggs contain precious items and Exp. 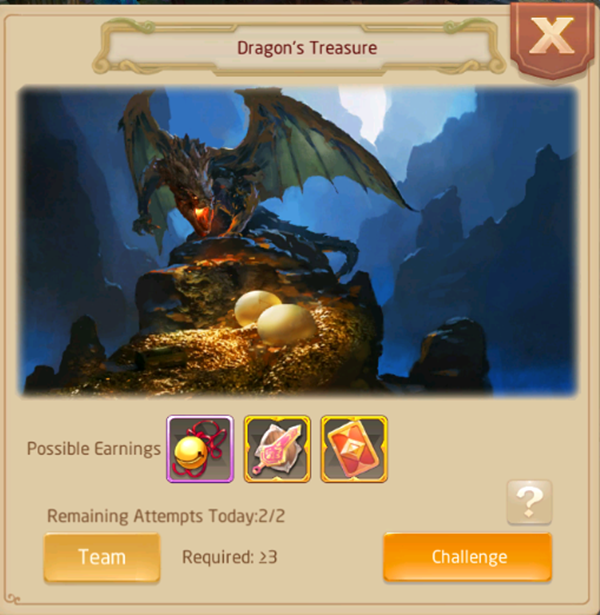 The Dragon's Treasure mode is open daily to characters whose level is ≥Lv.20.

It opens once every two hours every day from between 11:00-23:00, after the event has opened, you can enter anytime within the 120 minutes.

You can only obtain one reward from each Dragon's Treasure event, and you can obtain 3 times max a day. After obtaining three rewards in one day, you can still enter the event Dungeon, but you won't be able to obtain an event reward. You'll only be able to earn a “Helper Card” for your efforts in helping other players earn their rewards.

You must enter Dragon's Treasure as a team. Tap on the “Team up” button on the Events panel to see this event's team up information, after teaming up you will be taken into the Dungeon with the team captain.

The Dungeon consists of two stages.

Stage 1: Steal Dragon Eggs from the two chambers to either side, avoid the patrolling guards within the area and take them back to the Dragon Egg Collectors in the middle. Once the team has collected a total of 12 Dragon Eggs or the collection time has exceeded 3 minutes, it will enter into the next stage.

Stage 2: Defeat the “Energy Guard” and obtain the Energy Crystals dropped to obtain the power from smashed Dragon Eggs. Every time you smash a Dragon Egg you can obtain a reward dropped from the Dragon Egg. The Great Dragon in the middle of the area will use a large area skill “Giant Dragon's Breath” after a period of time, it does tremendous damage so be sure to dodge it.